Hurricane Irma has brought significant damage to much of the Caribbean as it’s barreled towards South Florida.

One of the islands in the path of the “potentially catastrophic” Category 5 hurricane was Necker Island, the British Virgin Island retreat belonging to billionaire entrepreneur Richard Branson.

Earlier this week, Branson announced that he and his team would be riding out the storm in the main house’s wine cellar.

Following the storm’s hit on the island, a spokesperson for the Virgin Group told Business Insider: “Virgin Limited Edition can confirm that on the 6th September 2017 Necker Island sustained extensive damage as a result of Hurricane Irma. There were no guests on Island at the time and all staff staying on Island have been accounted for as safe and well.”

This is not the first time that Branson has had to repair the structures on Necker Island. A major fire in 2011 brought major damage to the main house, which took two years to rebuild.

Branson bought the 74-acre island in the British Virgin Islands for $180,000 after visiting in 1978. He has called it “the best financial move” he ever made. The island has been a getaway for celebrities, entrepreneurs, and even former President Barack Obama, who visited shortly after he left the White House in January.

Take a look around the island as it looked in less stormy times.

74-acre Necker Island is located in the British Virgin Islands, in the Caribbean Sea. 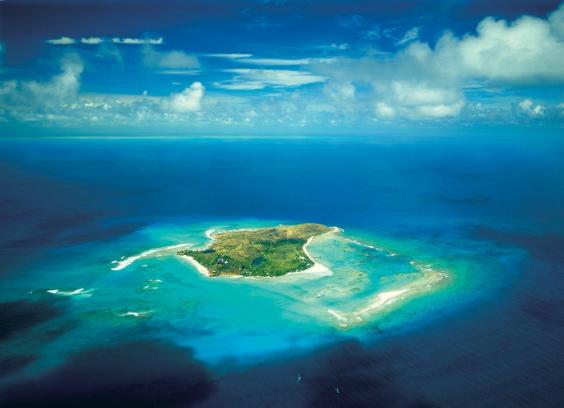 The island features two “private” beaches (though it’s a private island, all beaches up to the high-water mark are open to the public, under British Virgin Islands law), two infinity pools, a swim-up bar, a hot tub that fits 30, a personal chef, and around 100 employees.

Many celebrities have vacationed here, from Princess Diana to Mariah Carey, and even Nelson Mandela. Kate Moss had her 40th birthday party on Necker, and Google co-founder Larry Page had his wedding there.

Obama tried his hand at kitesurfing, a favorite hobby of Branson’s, during a visit there in January. 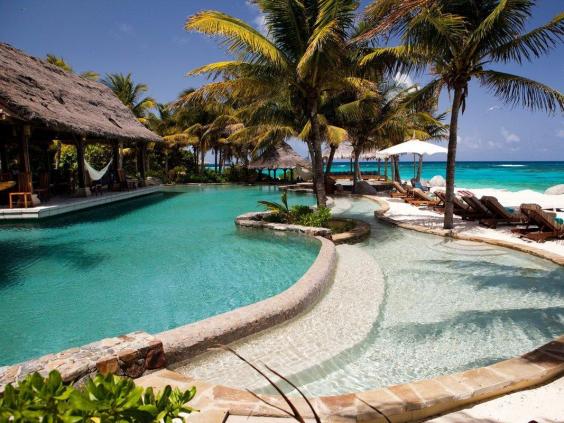 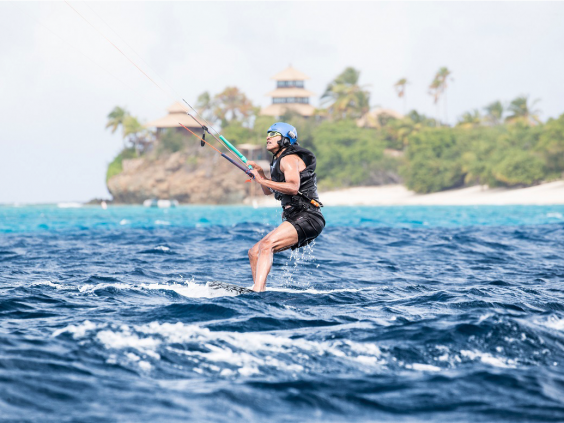 The Great House was built with eight guest bedrooms and a 1,500-square-foot master suite with panoramic views of the Caribbean.

It was uninhabited when Richard Branson bought it more than 30 years ago for $180,000. 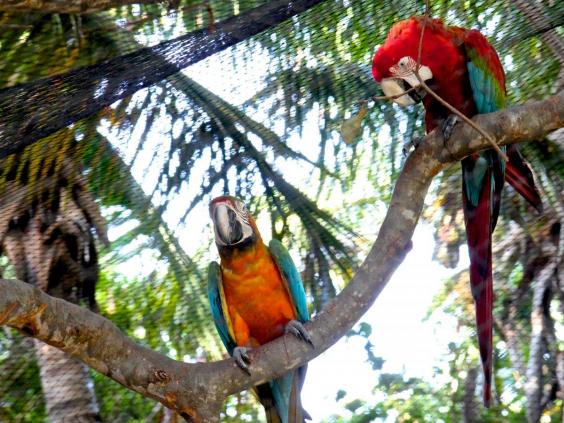 The entrepreneur spent years turning Necker into a private island paradise for personal use, and to rent to guests.

But tragedy struck in 2011 when Necker’s Great House was struck by lightning and burned to the ground (fortunately, no one was injured). Branson vowed to rebuild. 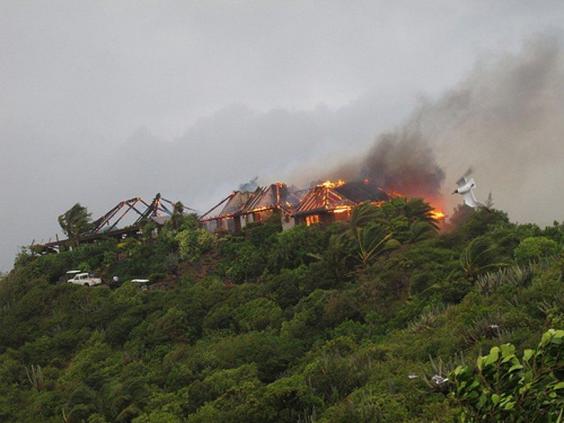 The rebuilt house was inspired by Balinese architecture. 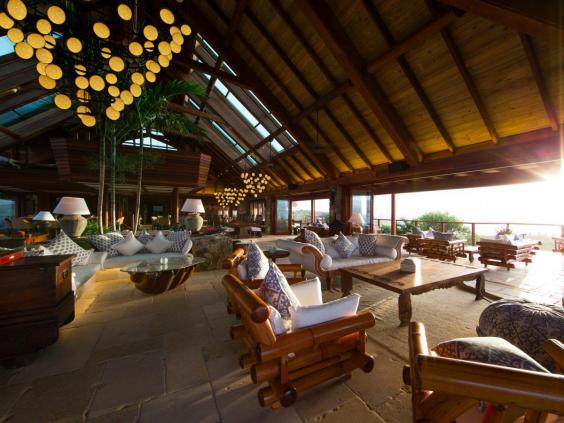 The house was designed to have a 1,500-square-foot master suite with a two-person jacuzzi and outdoor bath. 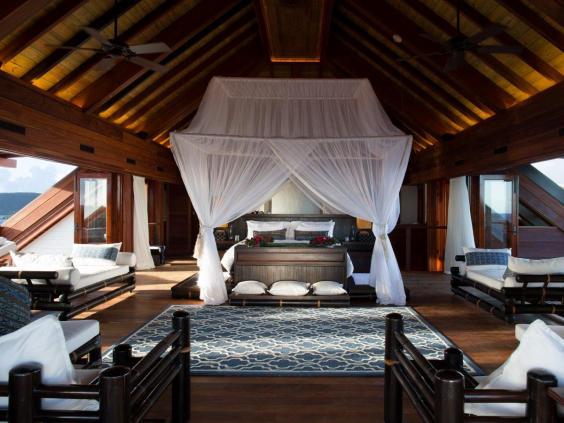 A beautiful private terrace also wrapped around the house. 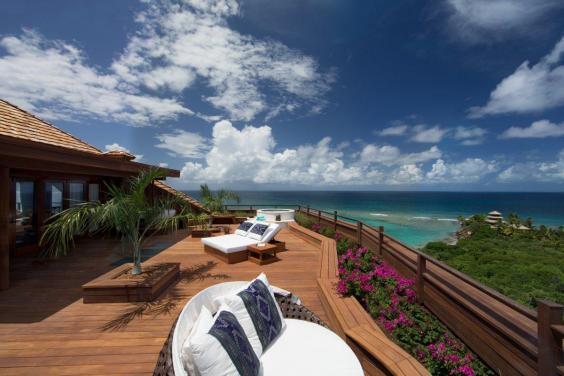 The Great House was also built with eight additional bedrooms.

In addition to the main home, six private “Bali Houses” were built on the island. 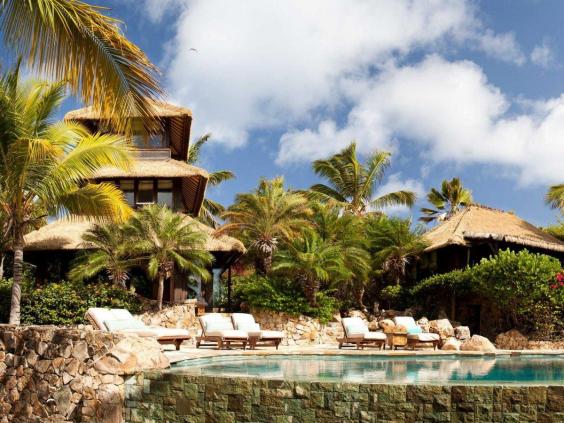 In total, Necker Island was built to accommodate a total of 34 guests.

Guests who stayed on the island were served in the open-air Great House, with panoramic views of the Caribbean.

When the resort is operational, there are tons of activities, like tennis. The Necker Cup, a tennis tournament, is held on the island every year. 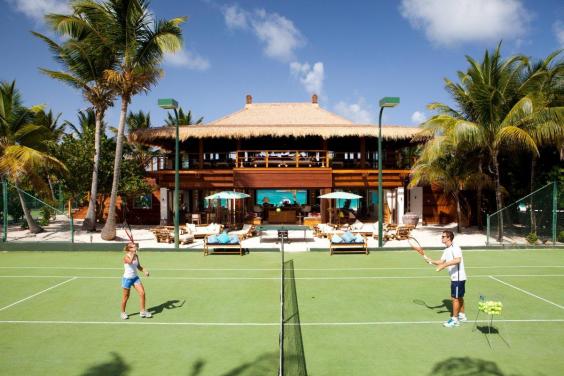 Even the gym was built to include stellar ocean views. 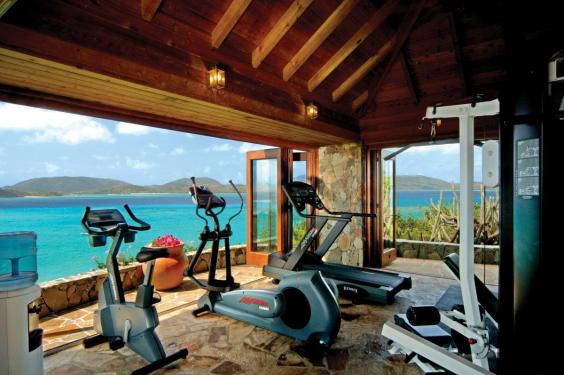 Previous guests could also take advantage of the tranquil spa.

Or they could explore in Branson’s mini-submarine, the Necker Nymph. 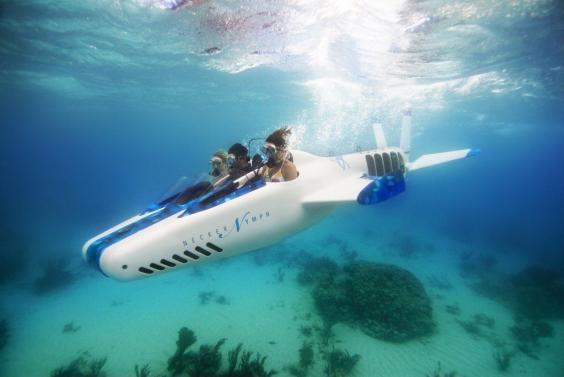 Branson and his team rode out the hurricane in these bunk beds. “All of us slept together in two rooms. I haven’t had a sleepover quite like it since I was a kid,” Branson wrote on his blog. “We were listening to the parrots in their boxes in the next room chattering away. Watching the tortoises congregating together, as if they sense what is coming our way.” 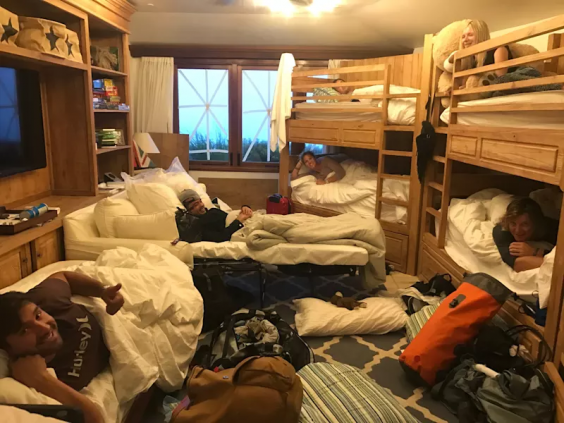